Fine Bubble Technology consists in enriching liquids with gas bubbles of a diameter of a single micron or lower.

Such a degree of fragmentation of the bubbles causes many unusual physical properties. Unlike bigger bubbles, which either float to the surface of the liquid and burst, or dissolve into it, the system can remain stable for as long as a few months. 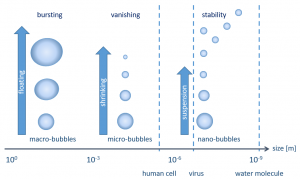 Due to the tendency of equal dispersion of the bubbles in the entirety of the volume of the liquid medium, the fine bubbles reach every nook of the vessel or the object submerged in it.

The bubbles remain in equilibrium due to surface tension. High pressure within the bubble depends on its size – the smaller the diameter, the higher the pressure. A bubble with a diameter of 50 nm has a pressure of around 60 bars.

Mass bursting of such bubbles, for example due to hitting the surface of a solid mass or caused by an acoustic wave results in:

Research on fine bubbles and their multiple uses is lead by Japan. Fine Bubble Industries Association(FBIA), with widely recognised multi-industry companies and industrial groups such as Hitachi, Kyocera, Mitsubishi, Panasonic, Sharp and Toshiba as members, was founded in 2012.​

Outside of Japan, the fastest development of fine bubble technologies and their uses can be observed in South Korea, Taiwan, Singapore, China, and USA, and recently in Canada. The ever growing number of various implementations of fine bubble technology increases the knowledge of the possibility of their use and causes increased activity from device producers.